I have become addicted to Brian Haig’s books.  They are really enjoyable, fast paced and cleverly written.  I really enjoyed the President’s Assassin.  I thought the book was much better than his last one Man in the Middle.  In this book Sean Drummond is back with his trademark smart-ass character.  But he is a clever military lawyer who is on loan to the CIA in this book.  He gets drawn into a murder investigation by the FBI and that is where the action begins.  There are so many twists and turns it will make your head spin.

Sean Drummond, the JAG attorney whose crime-solving skills are almost matched by his ability to tick people off, has a new assignment: working for the Office of Special Projects, a CIA offshoot. Not long after his reassignment, Drummond is called to a murder scene where one of the six victims is the White House Chief of Staff and where a note was found in which the assassin threatens the life of the president. In this kind of thriller, the outcome isn’t much of a mystery; it’s how we get to the outcome that counts, and Haig leads us there through a series of plot twists, shortcuts, and dead ends that never fail to keep us on our toes. Haig is still developing as a novelist, and readers familiar with his previous books will note that Haig’s appeal is no longer purely plot driven. Action is still his calling card, but his supporting characters are becoming more fleshed out, his dialogue smoother.

Here is the 4th book in the Brian Haig series.  I found this book to be gripping.  I could not put it down.  It is a big improvement to the last book I read by Haig (the Kingmaker).  The story really is amazing and for those of us that love a good thriller this is it.

Haig’s wisecracking J.A.G. attorney Sean Drummond returns for his fourth caper in three years (after January 2003’s The Kingmaker). Unpopular with his military superiors because of his sharp tongue and his tendency to attract trouble, Major Drummond finds himself loaned out to a private law firm. Culper, Hutch, and Westin represents some of the District of Columbia’s most staid, old-line institutions, and Drummond begins ruffling feathers from the moment he arrives, though he does prove surprisingly popular with some clients. Meanwhile, a serial killer is taking out attractive young professional women. The first victim is Lisa Morrow, Drummond’s sidekick in Haig’s debut thriller, Secret Sanction, and also a military lawyer working for Culper, Hutch, and Westin. In fact, Lisa’s on her way to meet Drummond when she’s murdered. Chapters from the obsessive killer’s dark perspective alternate with Drummond’s cheeky first-person narration. Not happy with police progress on the case, Lisa’s sister Janet, also a lawyer and a dark-haired beauty, steps forward to help Drummond investigate, even as victims pile up. Both Janet and Drummond prove to be entertaining thorns in the side of crusty police detective Spinelli, the officer in charge of the murder investigation. Haig introduces related subplots featuring corporate greed and criminality, but they don’t have the visceral chills or the sexiness of the serial killer story line. In the end, it’s all about Drummond; though the novel is overlong, the hero’s sharp and devilish style should keep reader interest high until the surprising conclusion.
Copyright 2003 Reed Business Information, Inc.

This is the third book I have read by Brian Haig.  I thought it was not as good as the first 2 books The Secret Sanction and Mortal Allies.  Haig’s main character Drummond is just too much of a smartass which starts to become annoying.  However, it is definitely a

good read and I would recommend it.

Military lawyer Sean Drummond, the wiseass hero of Haig’s promising new series, ventures into the ’90s aftermath of the Cold War this time out. The rollicking, free-swinging attorney is assigned to defend U.S. Army Gen. William Morrison, a Russian specialist accused of being a Soviet spy for 10 years. Drummond doesn’t particularly want the job. On a professional level, he dislikes traitors. Personally, he resents the pompous Morrison. Complicating matters further, Drummond still carries a torch for Morrison’s sexy wife, who had her pick of the two men years earlier and opted for the one with the higher rank. Despite all the distractions, Drummond hurls himself into the case. The action bounces back and forth in dramatic fashion between Washington, D.C., and Moscow, with Drummond finding nothing but discouragement in both capitals. It is only after two attempts on his life that he begins to suspect that Morrison was framed. Drummond’s tireless investigations eventually put him face to face with a man who has been the driving force behind every Russian ruler in the past 30 years: the so-called Kingmaker. Haig’s third Drummond adventure (after Mortal Allies) rolls along in high spirits, mixing clever cloak-and-dagger tricks, gutsy heroics and edgy, often humorous dialogue. Drummond at times borders on comic caricature-he personally kills five villains, stabbing one fatally in the eye with a ballpoint pen-yet he is easy to root for and fun to watch in action. Remarkably, his smart-alecky personality, expressed in one wisenheimer comment after another, remains fresh from start to finish.

Really looking forward to the new book by Brian Haig–if you like a good thriller then I would highly recommend you try his books. They are fast-paced and fun to read. I would read the series from the beginning. 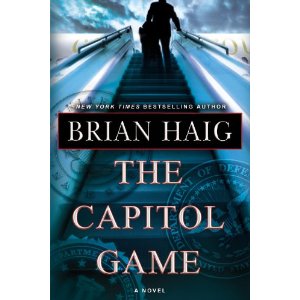