This is the third book I have read by Brian Haig.  I thought it was not as good as the first 2 books The Secret Sanction and Mortal Allies.  Haig’s main character Drummond is just too much of a smartass which starts to become annoying.  However, it is definitely a 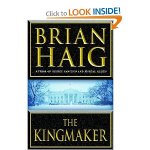 good read and I would recommend it.

Military lawyer Sean Drummond, the wiseass hero of Haig’s promising new series, ventures into the ’90s aftermath of the Cold War this time out. The rollicking, free-swinging attorney is assigned to defend U.S. Army Gen. William Morrison, a Russian specialist accused of being a Soviet spy for 10 years. Drummond doesn’t particularly want the job. On a professional level, he dislikes traitors. Personally, he resents the pompous Morrison. Complicating matters further, Drummond still carries a torch for Morrison’s sexy wife, who had her pick of the two men years earlier and opted for the one with the higher rank. Despite all the distractions, Drummond hurls himself into the case. The action bounces back and forth in dramatic fashion between Washington, D.C., and Moscow, with Drummond finding nothing but discouragement in both capitals. It is only after two attempts on his life that he begins to suspect that Morrison was framed. Drummond’s tireless investigations eventually put him face to face with a man who has been the driving force behind every Russian ruler in the past 30 years: the so-called Kingmaker. Haig’s third Drummond adventure (after Mortal Allies) rolls along in high spirits, mixing clever cloak-and-dagger tricks, gutsy heroics and edgy, often humorous dialogue. Drummond at times borders on comic caricature-he personally kills five villains, stabbing one fatally in the eye with a ballpoint pen-yet he is easy to root for and fun to watch in action. Remarkably, his smart-alecky personality, expressed in one wisenheimer comment after another, remains fresh from start to finish.